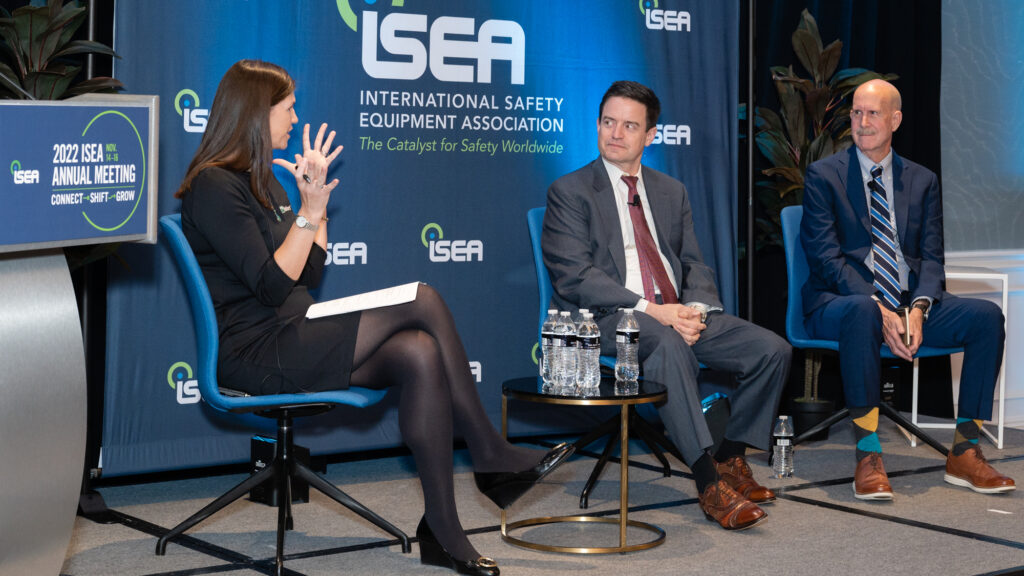 Bullard said the Biden Administration is making the issue of equity and inclusivity a priority, and the safety equipment industry has been discussing equity in PPE, including a NIOSH webinar on the topic this month. She asked both guests to speak on the topic.

Dr. Howard said, “Equity is looking at how people differ.” He noted beards and turbans as an example. “We of course want to have equitable respirators,” he said. “But there are obstacles and barriers to getting there.”

Parker mentioned a recent worker summit on equity he attended, where he listened first-hand to worker experiences, from immigrants and people of color. He told him stories of vulnerability and exploitation, and some said PPE wasn’t even provided to them. He noted another event featuring women who told him their PPE doesn’t fit, and they are losing job opportunities because of it.

Parker said OSHA is doing outreach to underprivileged communities and workers about their rights to have PPE. “They don’t understand they are entitled,” he said.

Dr. Howard added, “This is an industry responsibility, too!”

“There are only so many resources government has. You, the manufacturers, can do more to educate users,” he said.

When asked about OSHA’s focus on Heat Stress this year, Dr. Howard said, “We’re excited OSHA is excited about this too, finally!”

“Heat stress is a serious issue,” said Parker. He said the National Emphasis Program aimed to complete 400 inspections, and to date, it has completed more than 1,600. “This was a year of education for employers about the basic precautions,” he said.

Parker said feedback from inspections has been positive. Many worksites already have heat stress programs in place. However, OSHA is seeing complexity when it comes to issues like environmental challenges.

Bullard, as the head of a legacy hard hat manufacturer, joked she is particularly interested in head protection and sought feedback on the “new wave of helmet-style products.”

“The issue of neurotrauma is a serious problem,” said Dr. Howard. He noted that in seven years, more than 2,000 people have died from this type of head trauma. “We need to look at the science behind hard hats.”

Parker said OSHA is piloting safety helmets with its inspectors so that others can see and consider adoption.

Dr. Howard said hazards from the inhalation of biological agents is a major threat, and it goes beyond COVID. “There is an Ebola outbreak in West Africa right now,” he said.

He said the interval between these events is decreasing, and that respiratory protection will be for everyone, not only workers.

“This is the number one challenge in my mind,” he added. “We’re going to have to figure it out.”

Parker agreed. “We’re learning more about air quality since the pandemic raised awareness.” He called this an “emerging recognition.”

Parker also said there is a growing recognition to protect worker well-being. “The suicide rate among construction workers is astonishing,” he said.

Dr. Howard added, “There is a greater emphasis on mental health, and this includes the challenges of navigating substance abuse.”

The week after Secretary Doug Parker spoke to ISEA members at the Annual Meeting, OSHA released its outreach initiatives for FY 2023. It includes a summary of key national initiatives, a listing of priority industries/topics, and a calendar of key dates. ISEA will continue to support OSHA in its efforts and these initiatives to educate employers and workers about safety on the job.